Certain topics seem to come up over and over again in the blogosphere – someone posts an opinion piece, everyone else posts their opinion pieces either agreeing or violently disagreeing, and then the whole thing dies down until someone sparks it again. Recently one of the topics de jour has been selfies, and more specifically, whether they’re helpful or harmful to women. The conversation about taking photos of yourself always seems to boil down to a discussion of female vanity – is it good? Is it bad? Should we be proud of how we look, or is that just propping up the idea that being beautiful is the most important thing a woman can accomplish?

A lot of women want to be perceived as attractive, and with good reason. There are dozens of studies showing that attractive people, particularly women, are more likely to be hired in job interviews, earn more, and are generally seen as more competent. And yet, we’re also told we’re not supposed to be proud of our beauty. Declaring publicly that we think we’re attractive is vain, self-centered, and “tacky.” So we’re supposed to take in all of this information about how being attractive is better, do as much as we can to be attractive and attain all these rewards for our attractiveness, but also maintain the illusion that we have no awareness of our own attractiveness. When you pull it out and look it, this is actually a pretty bizarre contradiction to try and live up to.

How to address this contradiction isn’t what I want to talk about today though. What I want to talk about is where it comes from. Selfie controversy is just a new expression of a very, very old contradiction centered around the eternal concepts of  beauty, sinfulness, and pride. This whole tangled mess around female beauty has been in place more or less since the start of Western civilisation – certainly from the start of Christianity, and despite Western society moving further away from the Christian society it once was, the early Christian scholars’ ideas about female vanity are still deeply entrenched in our social consciousness.

A German woodcut from 1498, called Of Overbearing Pride

Early Christian writers spent a lot of time talking about how awful female vanity was; they had a great deal to say in particular about cosmetics, and how using them was an insult to God.  You see, according to these scholars, not only are you showing gross ingratitude to God because you’re altering how God made you, you also run the risk of not being recognised come Judgement Day. Scary stuff indeed. Tertullian wrote in his essay De Cultu Feminarium that the only acceptable adornments for a woman were “to have their eyes painted with chastity, the Word of God inserted into their ears, Christ’s yoke tied to their hair, and subject themselves to their husbands.” Fair enough, you might think; don’t mess with the body God gave you, that’s not such a hard instruction to follow. Except attractiveness was more or less all the power women had at the time.

Women weren’t allowed to read, let alone study or own businesses, or even acquire wealth or property in most areas. Snagging a good marriage was how they secured their futures, and the fact of the matter was that no matter how pious the husband, he was going to choose a wife he was attracted to over one he didn’t find attractive. There was also an assumption in the Renaissance period that God used ugliness and deformity to mark people who were evil, sinful, or deserving of punishment. A prominent philosopher of the time, Count Castiglione wrote, “I say that beauty springs from God … so one cannot have beauty without goodness. In consequence, rarely does an evil soul dwell in a beautiful body, and so outward beauty is a true sign of inner goodness.”

This perception of attractive women being not only nicer to look at, but also more blessed by God and therefore just all around better, continued well into the Tudor era, and even began to significantly influence English politics when Queen Elizabeth the First took the throne. Elizabeth was in a very tenuous position from the very start of her reign, and there was a lot of pressure on her to prove herself worthy of being queen. Leading up to her coronation, English politics had been rather…well, turbulent, and along with needing to settle down the whole situation, Elizabeth also needed to shake off the stigma of accusations of witchcraft that had been leveled at her mother. At that period in time she had very few ways to prove herself as being worthy of her crown (and not a witch); appearing too clever would look sinful, being too aggressive would look unfeminine, and so she focussed a great deal on appearing as attractive as possible. From her very first appearance as Queen, Elizabeth created and maintained a very carefully put-together visual impression. She chose not to wear the flowing headdresses favoured by most of her court at the time, so as to show off her long flowing red hair, which made her look more maidenly and innocent. She kept her hairline plucked well back, as a high forehead was thought to be a sign of aristocratic blood and maidenly virtue. To further the idea of herself as a perfect, saintly queen, she also went to rather dangerous lengths to keep her naturally pale skin as white and unmarked as possible. Among other cosmetic potions and powders she was known to have used a great deal of ceruse, a mixture made finely ground white lead powder blended with vinegar that was applied all over the face and neck. By all accounts, it worked wonders at covering up everything from sunspots to smallpox scars – but it was also, unfortunately highly toxic. This concoction was also apparently often sealed in with a layer of egg white, to create the impression of being made of actual porcelain.

Interestingly, the low cut of her dress in this painting was meant to indicate youth and virtue.

When she was excommunicated from the Catholic church, Elizabeth found herself in a very tenuous position. By excommunicating her, the Catholic Church had told her Catholic subjects that she wasn’t really their queen anymore, and they didn’t have to listen to her. She needed a popularity boost, and fast. Her nobles responded to this situation by starting a fashion for wearing miniature portraits of the Queen as badges, and soon these miniatures were produced and distributed in extraordinary numbers.  You could say these were perhaps the first instance of selfies – her image certainly reached as many people as a popular Instagram account would these days. 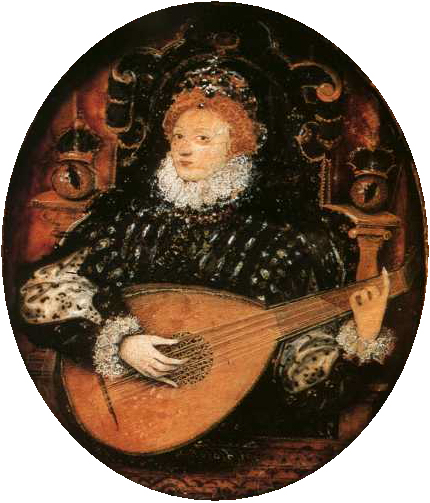 One of the more popular miniature portraits of Elizabeth, showing her rocking out like the cool kids.

It all sounds pretty vain from a modern perspective. Putting poison on your skin every day just to appear paler, having hundreds of thousands of portraits of you created just so everyone in your kingdom can see how pretty you are – but it was what she had to do to rule effectively. Being attractive was seen as being a Good Person, and being ugly meant you were a sinner. If she wasn’t seen as sufficiently attractive, she would have been kicked off the throne and almost certainly executed. And yet Elizabeth was also still required to maintain the perception of absolute modesty, piety, and virginity.

While these days Western society has largely moved away from the idea that being unattractive means God has specifically cursed you, a lot of the assumptions still remain. Attractive people – especially attractive women – are still viewed as somehow inexplicably “better” than women deemed unattractive, and are offered huge rewards for their attractiveness. At the same time, they’re expected never to mention any awareness of their attractiveness, or show any sign of effort expended to attain or maintain that attractiveness. I hope this changes some day. I hope that one day women can be any size, shape, or colour at all and still be offered exactly the same opportunities. I hope that one day women can say out loud, “Damn, my hair looks amazing today,” without being accused of being shallow or vain – the modern day equivalents of “sinful”. But these issues started a long time before selfies, and I think they’re going to continue for a long time yet.

Miniature portrait of Elizabeth I, attributed to Nicholas Hilliard. Image courtesy of Wikipedia

The author of Reluctant Femme, Cassie is a queer thirty-something Australian who thinks too much, reads too much, and has way too many pretty things. Her writing revolves around exploring concepts of femme and femininity, beauty products, feminism, and just how much glitter you really can fit into a polish before it’s unusable. You can catch up with her in shorter bursts on Twitter as @anwyn, and catch her shilling her shiny creations from her Etsy store (https://www.etsy.com/shop/ReluctantFemme)