There are a few things I miss about being younger. Most of them revolve around stuffing my face full of lollies that I’d pilfered from my siblings, and spending entire days at local public pool. But as I trundle steadily on towards middle age, I’m discovering there are also some pretty awesome things about getting older too. While I have to pay bills, and rent, and go to work when I’d rather watch cartoons, I can also eat cheesecake for lunch if I feel like. I can watch scary movies right before bed, and buy myself presents just because I want them. And over the last year, I’ve discovered one more new and totally mind-blowing (for me) aspect to being grown up – it’s my party, and I can absolutely be pretty if I want to.

As a teenager, I had a very straightforward idea of who I was, who I wanted to be, and which things were and were not For Me. I had decided at about 12 there were two types of girls in the world – girls like me, and girls like Them. Girls like Them were the pretty girls, the skinny girls, the girls who wore makeup and read Cosmo without being embarrassed about it. They were the ones who dated the good looking boys, the athletes, and They made fun of me for reading at lunchtime. They were silly, giggling idiots (or so I thought) and therefore everything They liked was also silly.  I didn’t care how I looked, because that was something They did – I was better than that. I was better than Them. 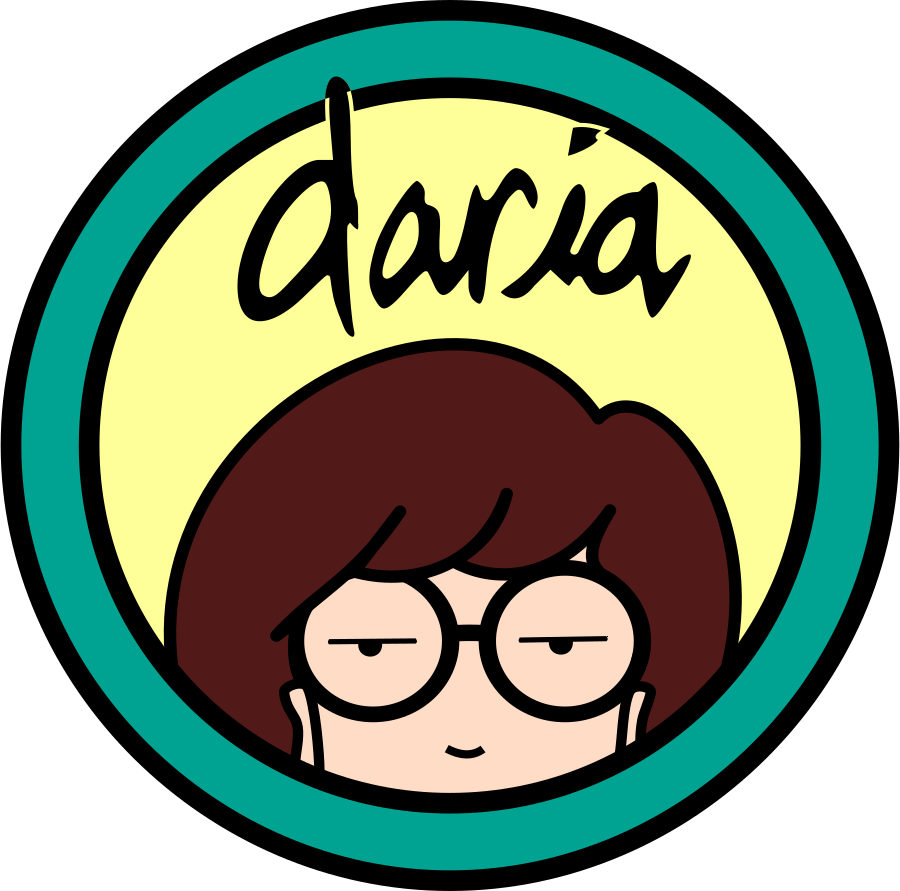 I’m sure you’ll just be SHOCKED to discover this was one of my
favourite shows in high school.

As I careened chaotically through my 20’s I ran into more and more girls that were exactly how I aspired to be – funny, fierce, intelligent and well-read – except with one big difference. Unlike me, who lived in cargo pants, they had no problem putting on liquid liner and rocking a killer pair of heels. It slowly dawned on me that maybe, perhaps, one could actually be quite femme indeed without actually being stupid or silly. It’s a pretty obvious conclusion now, I know, but at the time this was a world-changing revelation for me. Through multiple exposures to fierce, spectacularly femme role models, my snarky view of dresses and makeup and all those girly things eventually completely eroded. I decided that I would actually very much like to give that whole femme thing a bash.

But despite shedding my preconceptions, I still discovered a big ol’ hurdle standing between me as I was, and the Pretty Pretty Femme Princess I wanted to be. You see, I’d missed all the teenage mucking around that teaches girls how to put on mascara without poking their eyes out, because I’d been too busy reading and scowling at people over the top of my glasses. Despite being in my late 20’s by this time, I found myself in the awkward position of eyeballing a makeup counter seriously for the first time, and having no idea whatsoever where to even start. On top of my overwhelming naivety when it came to anything femme, I wasn’t even sure it was worth giving it a try. The most expensive concealer in the world wasn’t going to make my teeth straight, and a perfect manicure wouldn’t make me any less fat. I had such a terrible fear of trying to dress up and looking like an elephant in an ill-fitting tutu, that I could never bring myself to really commit to change. I would buy a lipstick, then never wear it. I would optimistically pick up an eyeshadow palette, and then barely use it enough to dent the surface. It was easier to stick to the things I knew I was good at – being opinionated, reading, talking too much.  Being fashionable, being stylish, being femme – my fear and uncertainty told me these things were just not for me.

But the burning desire for swishy skirts and shiny things, once kindled, would not be quelled. Little by little, the urge to dress up, to wear makeup, to be a pretty, pretty princess grew and grew, until it became strong enough to overcome my self-consciousness. I decided at 32 years of age that it was time to stop chickening out, stop faffing around, and really give my desire to be pretty a good old college try.

I knew that if I tried to push myself out of my comfort zone in private, I’d give up – it’s just too easy to abandon a project no-one is tracking. If I knew no-one was paying any attention, my skittish habit of tiptoeing up to a makeup counter and then fleeing in terror would stop me from really making any progress. I’ve always been an avid writer, so I decided to start a blog chronicling my experiments. Despite my philosophy-heavy early posts, I started Reluctant Femme primarily as a way to dare myself to try something different. I pulled the mean but effective trick on myself of not only starting the blog, but TELLING everyone I’d started a blog. My friends (being lovely people) read every single post, and would ask how it was going. I knew if I skittered away, I’d have to admit I’d bailed not only to myself, but to all my friends. Starting a blog was such a public commitment that I managed to guilt myself into giving this new me a real chance to take root. My natural drive to do anything I attempt “properly” really helped push me along as well as just fear of admitting I’d failed publicly. There are few things I hate as much as doing something half-heartedly, so once I made a commitment to learn the things I needed to know about makeup and dresses and being girly, I threw myself right into it. I read everything I could, from makeup blogs to histories of Revlon to essays on sumptuary laws in medieval Italy.

Somewhere in this frenzy of learning and experimenting, I found a new normal. When I started this, I pretty much assumed I would give it up relatively quickly. I told myself I was just dipping a toe in, and that I could retreat back to my old self any time I wanted to, as a way of placating the part of me that despises change. It wasn’t a big deal, I told myself. It’s just a phase. I’ll be over it in a year. This is, incidentally, one of the reasons I still take all my pictures with a camera phone instead of investing in a proper camera – I wanted to commit to trying this whole femme beauty blogger thing, but didn’t want to feel obliged to continue if I decided I didn’t like it. The thing is though, I did like it. I like it a whole bunch. By putting on makeup every day “for my readers”,  learning how to make nail polish look like it hadn’t been applied by a monkey “for my readers”, through all the research I did “for my readers”, somewhere along the line I started getting way more out of the whole process than just entertaining my readers. Putting colourful eyeshadow on of a morning isn’t just making good on a dare to myself anymore – it can change the whole way I view that day. I feel better about myself, happier and more confident when I’m wearing a swishy skirt. I enjoy the feeling of my hips swaying when I walk in heels. I reached for something I thought I could never have, and before I realised it was happening, I wasn’t trying to be pretty and femme anymore – I just was. It wasn’t “for my readers” anymore, everything I was doing was for me. I just happen to be lucky enough to have readers who find my adventures entertaining all the same.

These days,  I look in the mirror, and look at how people perceive me, and it’s like I’m a whole new person. In just over a year, I’ve gone from someone standing on the outside of femme pressing my hands longingly against the glass, to the person that people consult about all things girly and pretty. I look back, and I wonder how the hell all this happened without me even noticing. A year ago my work wardrobe was almost entirely variations on the theme of pants and a waistcoat, and I owned exactly three pieces of useable makeup. No one would have asked my advice about fashion, or cosmetics, ever. But now I’m now a person who knows how to use THREE colours of eye shadow at once; a person who gets excited about new jewellery; a person who knows what shoes to wear with at least most of my skirts. Fashion, style, being femme – I’ve realised these things are all things I could have had all along. I just had to get up the guts to try them on.

Check me out now, I’m fabulous!

I don’t know how long this phase will last. Maybe in a couple of months I’ll revert right back to my former cargo pants loving, bare-faced self. Maybe instead of dialing it down, I’ll graduate to wearing foundation every day!  But the thing that I don’t think will ever leave me about this year is the fact that I wanted to change, I tried changing, and I did change. No-one stopped me. No-one even tried. No one laughed (to my face). No one told me I wasn’t allowed. And if I can change this much about myself in just a year, who knows where I could be this time next year?

The author of Reluctant Femme, Cassie is a queer thirty something Australian who thinks too much, reads too much, talks too much, and has way too many pretty things. Her writing revolves around an exploration of femme concepts, beauty products, feminism, and how they intersect with being a queer, poly, cisgender woman with fantastic nails. You can catch up with her in shorter bursts on Twitter as @anwyn, and see endless pictures of her nails on Instagram as @anwynincognito. She lives for comments, so if you’re reading by all means speak up! Even if you think she’s full of crap, she always likes to hear feedback.

20 Responses to “From Frightened to Femme”